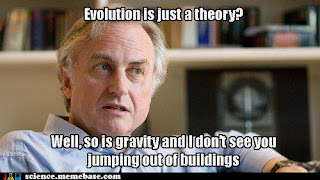 The most ill-informed criticism about evolution is the label it's given: theory. Richard Dawkins (above) makes a good point, albeit facetiously, that we live our lives believing and trusting in so-called "theories".  Like gravity. Scientists are still theorizing about what gravity is, yet it doesn't mean gravity is hogwash. Religious people use the word "theory" in a derogatory way to criticize evolution and natural selection, casting doubt on its legitimacy as an explanation for our beginnings. Fact is, evolution is far more than mere theory.

Isn't it odd that it's only people who believe in the literal God of the bible that make this accusation. These people insist that facts and evidence are trumped by a god who can create a universe that is only 6,000 years old, and in that feat, spontaneously create the rings in trees, the light that has taken millions of light years to reach earth from the cosmos, a woman from a rib... And the scary part is that the majority of North America's population believes in such fairy tales! We really, truly must take a head-on approach to instilling common sense and critical thought in our children. Otherwise, progress will be stunted.

Posted by James Hutchison at 10:35 AM